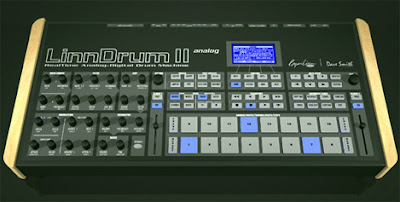 Roger Linn (the inventor of the programmable digital drum machine) and Dave Smith (creator of the Prophet 5 polyphonic synthesizer) have teamed up to introduce the LinnDrum II, 26 years after the original revolutionized the music industry.
Roger Linn unleashed the LM-1, the first programmable drum machine that played digital samples, in 1980. It cost $4,995 and allowed well-heeled electronic musicians to make all manner of percussion sounds without requiring the assistance of a real, live drummer. The LM-1 was upgraded to become the LinnDrum in 1982, with 15 acoustic samples (the sounds for the early Linn machines were captured at a sampling session featuring session drummer Art Wood). Linn machines are famed for their shuffle feel and plethora of individual voice outputs to make studio work easier. Thousands were produced before falling victim to low cost Japanese rhythm machines. Linn himself moved on to create the revolutionary AKAI MPC series.
The LinnDrum II will be sold in two different configurations. The basic 'LinnDrum II' will be a digital drum machine. The 'LinnDrum II Analog' will add four voices of Dave Smith's Curtis-chip based analog synth circuitry inside the box, which promises to be a deadly combination. The machine offers 16MB of internal sound memory and there's a compact flash slot on the back panel for adding more sounds. Fans of Roger Linn's later Akai samplers will be pleased to know that the new machine features velocity and pressure-sensitive pads and both MPC-realtime and XOX-box style step programming.
Dave Smith's site reports "Inputs and outputs include four audio outs, two sampling/audio processing/drum trigger inputs, phones, USB, MIDI in/out, two expression pedal/foot switch inputs, and four additional direct voice outputs for the Analog model."
I can't wait. This looks like a must-have machine for well heeled electronic musicians everywhere. It's scheduled for a mid 2008 release.
Posted by machineboy