We could do what those other supposedly geeky apparel companies do and print a regular t-shirt with a cool looking picture of a drum kit on the front... then say it was trendy, make a few Rock Band references and try to convince you to buy it. But we don't roll like that. At ThinkGeek we know you expect innovative new products and we're here to pony up the goods. 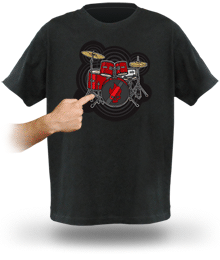 So, how about an electronic t-shirt with a picture of an actual playable drum kit on the front? That's right. Hit the drums on this shirt with your finger and they play through the built in speaker... simple but amazing. With 7 different drum sounds you're ready for a personal drum solo on your chest.

LINK:
CHECK OUT THE DRUM KIT T SHIRT AT THINKGEEK!
Posted by machineboy No comments: 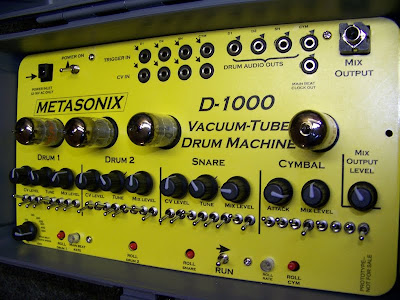 The first drum machine made with vacuum tubes since the Wurlitzer Sideman of 1959.

Unlike the Sideman, it's a "modern" primitive device--with plenty of inputs, outputs, and flexibility.

Even though it has only four drum sounds -- two tunable drums, a tunable "snare" drum (harder sounding than the others), and a cymbal -- control voltage inputs give great flexibility.

Each of the tunable drums is made from a vacuum tube ringing bandpass filter, and can be tuned to sound from below 20 Hz to over 2 kHz. They are also tunable with external control voltages, allowing complex patterns to be built up with external CV or pulse sources. Resonance of each filter circuit is set by internal trimpots. The cymbal sound is an extremely primitive circuit, with white noise gated by a pentode tube. The cymbal's attack is knob-variable and CV variable, from a sharp click to a soft "whoosh". The four outputs mix to a single tube preamp that allows for overdriving via the mix-level controls.

In keeping with the primitive nature of the soundmaking section, the pattern sequencer is extremely simple. Unlike early drumboxes, we won't subject you to preset nonsense like "waltz", "foxtrot", "swing" or the like. Instead, there is a single 8-pulse sequence with separate enable switches for each drum sound--set a toggle switch up to get the sound at that point, down for silence. Great for house, hardcore or other simple 4/4 patterns. The internal clock is settable from 60 BPM to over 1000 BPM. There is also a "roll" clock signal built-in, to generate a faster drumroll on any drum sound by pressing a button (speed is preset with an internal trimpot). If you don't like the internal sequencer, there are separate trigger inputs for each of the four sounds (the trigger pulse must be 0 to +5v, and less than 40 mS long). These trigger inputs operate in parallel with the built-in sequencer, so the D-1000's sounds may be triggered by its internal sequence and external pulses at the same time. As a bonus, the three tunable drums can also be used as tunable bandpass filters, by feeding a line audio signal to each trigger input.

No, it does not sound like a TR-606. It's a beast you have never seen or heard before.

LINK:
CHECK IT OUT AT TO THE METASONIX WEBSITE!
Posted by machineboy No comments: 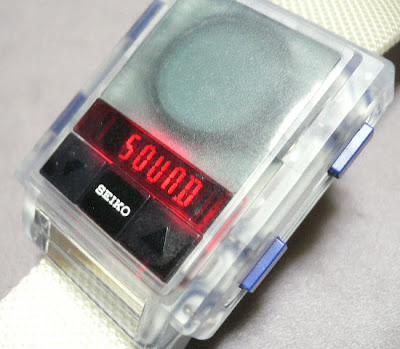 At some point in the early 1980s, watch manufacturers ran out of sensible new features to incorporate into watches. They'd already tried calculators, radios, cigarette lighters and even TV sets to get the attention of an increasingly jaded public. Rather than give up, Seiko chose to think outside the box. Way outside.

One can only imagine the sake-fueled club hopping that led to the development of the Seiko Frequency. This odd little device incorporated a speaker and six drum patterns, "created solely for watch by popular music producer Tetsuya Komuro," along with two metronome modes (one audible, one visual), an alarm function that played one of the six drum patterns or just beeped, and an EL backlight for checking the time while basking onstage in front of your adoring fans. 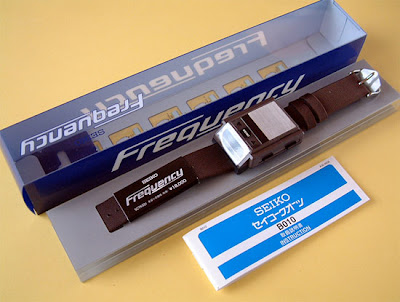 The Frequency wasn't marketed in North America or Europe, which is probably for the best. There are currently several on eBay, although they're anything but sensibly priced. [via Matrixsynth]

LINKS:
CLICK HERE FOR THE ORIGINAL POST WRITTEN BY JAMES GRAHAME AT THE WONDERFULL RETRO THING!
Posted by machineboy 2 comments:


Demo of the FunkBox Drum Machine ( http://bit.ly/7DxRl6 ) iphone app from Synthetic Bits. FunkBox is a pocket-sized emulation of classic vintage beatboxes, along with all their dirt and quirks. Grab a Funkbox and get busy making yourself some funky beats. Available now from the Apple iTunes iphone app store!

LINK:
CLICK HERE TO CHECK OUT THE iPHONE APP STORE!
Posted by machineboy No comments: 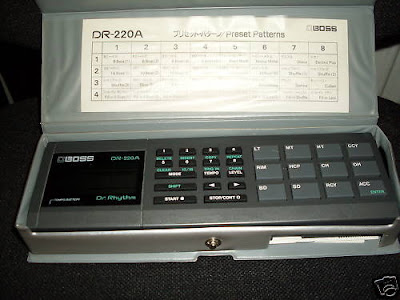 IN EXCELLENT CONDITION
ORIGINAL SOFT CARRY CASE
ORIGINAL MANUALS
COMPLETE WITH BATTERIES
ALSO RUNS OFF 9V PSU (NOT INCLUDED)
THIS IS A REALY EASY TO USE DRUM MACHINE FULL OF THOSE ROLAND SOUNDS THIS IS THE ACOUSTIC VERSION !
SIMPLE TO PROGRAM GRID SYSTEM
IF YOU WANT SOMETHING SIMPLE WITH GREAT RETRO SOUNDS FOR A GREAT PRICE THIS IS THE ONE 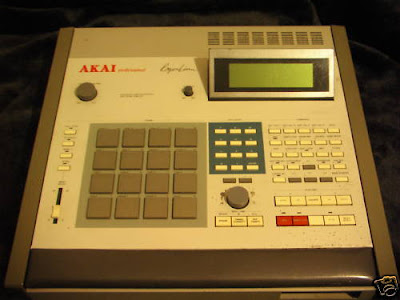 MPC60
The MPC60 was a 16 voice polyphonic 12-bit 40 kHz sampler / 99 track sequencer designed in large part by Roger Linn after Linn Electronics closed. It was similar to the Linn 9000. Akai released it in 1988. It had 750 kB memory standard, expandable to 1.5 MB. The sequencer is very flexible and powerful, famous both for its "swing" setting, and its easy to use step programming. It had 2 MIDI inputs / 4 MIDI outputs, allowing it to control up to 64 devices. The sequencer itself was offered as a separate product, known as the ASQ10, also released in 1988. The MPC60-II was nearly identical to the MPC60, but it featured a headphone output, and a plastic case, instead of the metal case of the original. It was released in 1991. 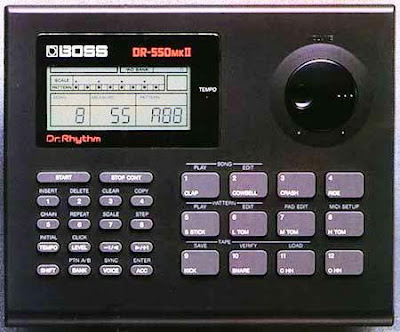 BOSS DR-550 MK2 DR RHYTHM DRUM MACHINE
THIS AUCTION IS FOR A BOSS DR-550 MK 2 DRUM MACHINE IN PERFECT WORKING CONDITION
COMES COMPLETE WITH:
POWER SUPPLY UNIT
USER MANUAL ON CD
THIS DRUM MACHNE IS A PERFECT ACCESSORY FOR ANY RECORDING ARTISTS OR FOR THOSE WHO JUST WANT TO PLAY ALONG! 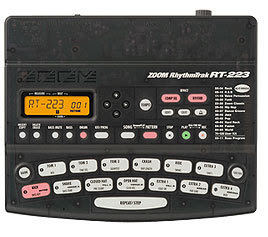 The range of drum kits built into the RT-223 is amazing. A total of 70 drum kits are onboard, with acoustic drum sounds for rock, R&B, funk, and jazz. You can add an analog rhythm machine great for techno and hip hop, and ethnic percussion sounds are available. There are also five human voice “Beat Box" style percussion kits, so you can create advanced rhythm tracks where kick, snare, scratch and other instrument sounds are expressed as human voices.

A drum kit consists of 13 pads x 3 banks equalling 39 sounds per kit. Sound sources can be freely selected and assigned to the pads. Fine-tune parameters such as pitch, level, and panning to create original drum kits. The RT-223 can store up to 58 user-programmed kits. The Bass Machine lets users choose from electric bass styles such as Pick, Finger, and Slap. Or select Acoustic Bass, Synthesizer Bass, or one of the other bass sources, 12 in total. To create a bass line, users play the pads with assigned chromatic pitches just like a keyboard. A dedicated switch mutes the bass sound at any time.

From rock, jazz, and funk to club and house, the RT-223 comes with 440 drum patterns that can be used straight away. A large number of phrase variations including intro, fill-in, and ending patterns are also provided. By simply combining these, users can easily whip up backing rhythms. Programming patterns is a snap, thanks to the touch-sensitive drum pads. The RT-223 records not only your timing, but also the dynamics of your finger work. You can create and store up to 511 patterns. The process is made even easier through visual cues provided by the self-lit pads and the FAST (Formula Assisted Song Translator) method.

LINK:
BID ON THIS ITEM HERE!
Posted by machineboy No comments: 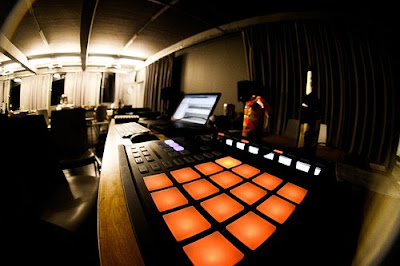 LINK:
HERE'S WHERE WE KNICKED THE PHOTO FROM!
Posted by machineboy No comments:


Rare Synare PS-1 4 pad, 12 zone percussion synthesizer built around 1977-78. I am a Synare fan and have owned several units. In my 15 years of collecting these I have not seen or found one in better shape than this unit. I bought it new old stock from a music store that closed about 3-4 years back. Filmed on an iPhone using the built-in mic, so sound quality is much better via DI or though an amp.