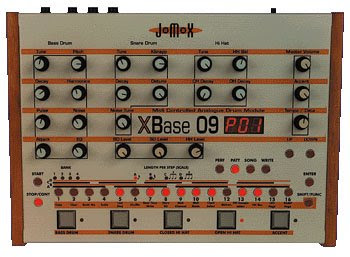 The XBase-09 analog drum machine from Jomox (Germany) is now available in the United States. The machine made its United States debut (in prototype form) at the Winter Namm show in Anaheim, California in January of 1997.
This truly analog drum machine features greatly improved sound generation parameters. As with the original Roland 909 and 808 drum machines, the kick and snare sections are true analog sound generators, however the XBase-09 also offers digital saveable and midi-adjustable controls for all parameters. In other words, drum sounds can be stored as "drum kits" (100 memories are available for drum kits), and called up at a later time.
For enhanced sonic manipulation, the bass drum section features eight parameter controls (yes, actual knobs!):
Tune (identical function to the original, however the range has been improved)
Pitch (alteration of the bottom tuning. Sub basses down to 25Hz or Piccolo flute tones are possible)
Decay (identical function to the original, however the range has been improved)
Harmonics (alteration of the upper tones of the VCO's)
Pulse (alteration of the pure pulse part of the attack...extreme kicks are available)
Noise (alteration of the pure noise part of the attack)
Attack (identical to the original)
EQ (filters the bass drum output and smoothes the bass...good for soft 808 kicks)
The snare drum section includes the following controls:
Tune (identical function to the original, however the range has been improved)
XSnapp (comparable to an extent to the 909 snappy although has more effect on the overall snare volume)
Decay (identical function to the original, however the range has been improved)
Detune (detunes the two oscillators...capable of producing cowbell sounds)
Noise Tune (tunes the noise filter of the snare)
The HiHat section includes controls for Tune, Decay, Balance (between Open and Closed Hats), and Open Hat Decay. The OpenHat and ClosedHat pads can also be used to control 909 Rim/Clap or 909 Crash/Ride.
All of the controls transmit midi data in real time for editing in a sequencer or for use within the internal sequencer. Because of this, no other analog drum machine in history has had the midi capabilities offered by the XBase. In their review (7/97) of the XBase-09, Sound on Sound magazine says "The XBase-09...has one of the best implementations of MIDI I've ever seen in a drum machine."
More info HERE!
Posted by machineboy