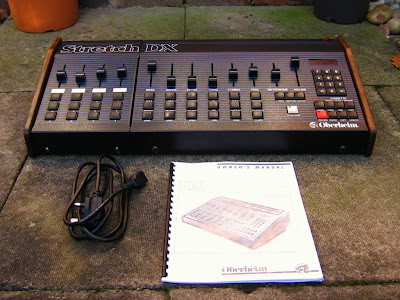 The DX Programmable Digital Drum Machine from Oberheim fills the professional musician's need for an afford able. easy to use, state- of- the- art drum computer. Based upon the modular Oberheim DMX Drum Machine, the DX offers the sound and features of the DMX in a less expensive, more integrated package . The DX is not a drum synthesizer; it is a complex microcomputer system programmed with digital studio recordings of real drums. It doesn't sound like a rhythm box. it sounds like a drummer. Not only does the DX sound like a drummer, it can play like a real drum mer; with rolls, flams, odd time signatures, uneven phrases, changing tempos, or even off the beat. Up to 2200 notes can be stored in the DX, recorded in any of 100 Sequences of any length or time signature. Drum sequences can be recorded in real time or one note at a time. Any of the 18 individual drums (including crash cymbal) or individual notes can be recorded, erased, and then re-recorded until the drum beat is exactly right. The sequences can be combined to form up to 50 songs. Each song can contain up to 255 sequences, arranged in any order, to form a complete composition. Tempo and Time Signature are programmable for each sequence, and with the DX's extensive editing capability, a song's structure can be changed quickly and easily. The DX has several Quantize modes, which correct your rhythm to any beat between l/4 notes and 1/32 note triplets, or turn the Quantize off for the human feel. In addition, there is a Swing mode which will give rhythms the uneven feel that is used so often in jazz and other music. There are individual tuning controls for each voice on the rear panel and each of the six DX voices has its own output. so you can record them on separate tracks. or EQ them separately. There is also a 7 input stereo mixer to allow you to mix all of the drums into the stereo and mono outputs. The DX can run in synchronization with the Oberheim DSX Digital Polyphonic Sequencer and the other components of the Oberheim Music System as well as other sequencers. There is a programmable external trigger, so you can control the DX with sequencers, synthesizers. or even a drum kit. A battery maintains power to the memory when the DX is turned off. so that you don t lose your sequences when you turn off power. A cassette interface is provided which enables quick changes of all of the sequences and permanent data storage. original list price $1395.00. STRETCH expander for Oberheim DX drum machines. The Stretch adds the two things DX owners want most of all: more sounds and more features for older model DX drum machines. For those DX machines, features are added like variable clock, auto start, cue tempo, midi clock out & more. Each Stretch voice has its own buttons, tuning, output jack and level control for the mixed output of the DX. Zif sockets are included to make it easier to add new sounds, containing chip locations for 4 more rows. original list price $495.00", go bid HERE!
Posted by machineboy