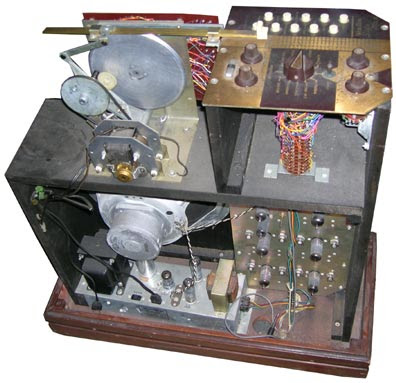 The Sideman was the first mass produced drum machine in the 50's and has AMAZINGLY crazy sounds, each sound having its own vacuum tube and the ability to dial in or out volume and 'umpf'. There are beats with use of a motor, belt, and rheostat (mambo, cha cha, etc) but the best part is the button board where you can play the sounds yourself. The sounds are weird and crumbly and great....very DEVO or Raymond Scott electronic era. All units are noisy with big ground noise but somehow that adds to the sound. I got this in a music store on the far west side of Chicago who thought it was broken. I bought it for $40 and brought it home and tightened one screw and it worked perfectly. I now have five of them. They come in different finishes, I have found, as well as with different grill clothes. I assume when you bought one new you were trying to most match the organ it was going to be the sideman to.
Posted by machineboy

Hi! I just bought one of these localy in Vancouver for 50$ and I'm planning on moding it to include pitch control for the drums (alongside proper pots for the decay to replace the trim pots). Also hope to midi trigger via Arduino Midi shield. It's amazing how much crazy bass comes out the kick when dialed in on the control pannel!

Anyway, I was just curious if you've done any of these things with your Side Men? :D