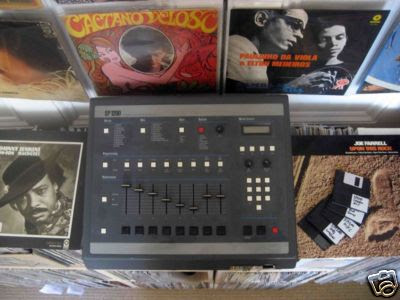 If you're looking at this you probably know what the deal is, 12-bit... 10 seconds sampling time. CLASSIC sound. But if not, then read on:

Fully working, comes with software 1.0 which boots up from a floppy disk of course.

I can throw in 5 floppies with drum samples on, but as you can see from the photo, this machine is meant to be loaded with samples from dusty old vinyl! Johnny Jenkins and Joe Farrell LPs are NOT included hehehe

I think I have the manual somewhere printed off from online, but not sure where it is...Many classic albums have been made with these and just a mic

Here's some stuff from WIkipedia about the SP-1200:

"Designed to be used as both a drum sequencer and sampler in one, the SP-1200 features a 26.04 kHz sampling rate (roughly half the fidelity of a compact disc) and 12-bit resolution; along with the idiosyncratic SSM2044 filter chips, these machines were fitted with make for a dirty, gritty sound. One of the attributes of the SP-1200 is its extremely small amount of memory—roughly 10 seconds.

The SP-1200 can store up to 100 patterns, 100 songs and has a 5000 note minimum memory for drum sequences. It also has a mono mix output and eight individual outputs, MIDI in/out/thru, SMPTE sync, and a metronome output. There is one button that allows you to select between banks A, B, C and D giving the user easy access to each of the 32 sounds. The front panel contains several LED lights, buttons and eight volume and pitch faders for each sound in the selected bank. Below each fader is a large button to initialize the sound, or select the sound for editing, and a switch to turn the trigger's velocity sensitivity off or on. The sequencer works in the familiar pattern-style of placing short consecutive sections of samples into a song. The user can easily add swing quantisation and tempo changes. The sequencer can sync the tempo to SMPTE, MIDI or analogue clock pulses. Also, if one wanted, the sequencer can synchronize the tempo to a tapping finger with the 'tap tempo' button."

go take a bid for this classic monster HERE!
Posted by machineboy

Hi there,
I've just stumbled on your site...I am looking for an sp-1200 at a decent price
Is it still for sale? Any help would be appreciated. Many thanks!
Regards,
Sam