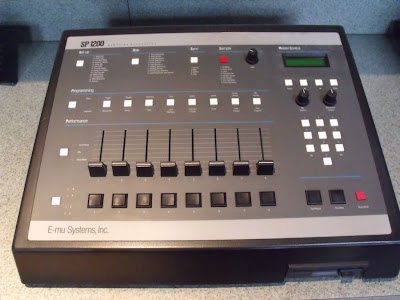 Wow this is an awesome piece of kit! here's more from the seller...
E-mu SP-1200 Black re-issue for sale. Serial # 2950387. 100% functional and in great condition. Minimal scratching and nothing major. She's pretty! First things first, sample anything into this thing and it comes out the other side sounding siiiiiiiick. I send stuff to the SP, sample it and then record it from the SP to my computer and I get that classic SP-1200 grit. If you don't know. Google it. Or listen to pretty much any hip hop album from the early/mid 90's. It's legendary! It has a sequencer too which is cool (make sure to double time the bpm for optimal swing) but the machine is by and large known for its famous ring mod sound you get when sampling it. (Listen to the intro of Daft Punk's "One More Time").

Is this still for sale?
email j-zilla88@live.com