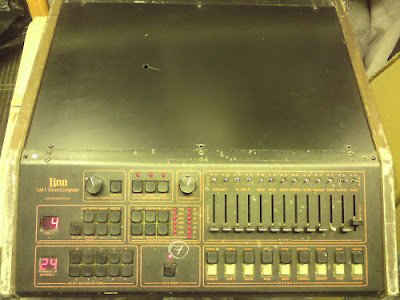 Linn Electronics LM-1 Drum Computer.
It is the very first model ever made by Roger Linn and has a serial number 00461 (0nly 500 were made).
Unit was tested and plays sequences (sometimes just bleeps), though it's very intermittent-it fails to load sounds, sometimes will freeze etc. Servicing is required to get it to its original working condition though we think that it may be that it's just the tape that needs changing (plus a general clean-up).

Needless to say it's a pre-1982 historic piece and very collectable!
NO RESERVE!
Unit is sold as it is.

This is THE classic drum machine of the 80's - it launched the drum machine revolution! The Linn LM-1 Drum Computer was created by guitarist Roger Linn and he used samples of acoustic drum sounds. At the time, they sounded great and much more realistic and they were a fresh alternative to the analog drum sounds of the '80's drum machines. About 500 LM-1's were made before the LinnDrum model appeared in 1982.

There are twelve 28kHz samples including: snare, kick, three toms, hi-hat's, tambourine, congas, claps, cowbell, and rimshot, but no ride or crash. There are also 100 memory patches! Patterns can be created in real or step time. An innovations of the time was the swing and quantize functions that appeared on the LM-1. The LM-1 is an historical synth that has a place in the sound of music from the heart of the '80's. Only 500 of these things are out there so don't count on finding one easily. It has been used by Phil Collins, Thompson Twins, Stevie Wonder, Gary Numan, Depeche Mode, The Human League, Jean-Michel Jarre, Vangelis, John Carpenter, Todd Rundgren, Prince, and The Art of Noise.