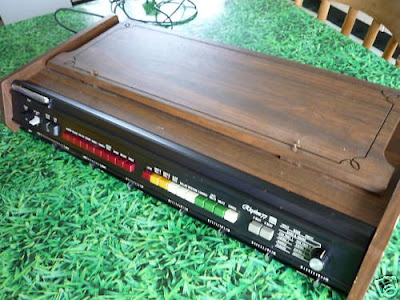 Roland TR-77 Analogue Drum Machine.
This was the first product to be produced buy Roland and the first in a long line of awesome drum machines

Its in great working order and good condition considering its nearly 40 years old!!
Here is a write up i found online.
The last one of these sold for £170

Anyhow, time for a little history... The Rhythm-77 (TR-77) was the product that launched the Roland Corp. in 1972 and was the flagship of the Rhythm trio, which included the R-33 and R-55. Its place in history is secured as the first Roland drum machine ever made. It was Ikutaro Kakehashi's baby which he used to introduce the world to ROLAND after he sold off Ace Tone and moved on to bigger things. The Rhythm-77 (TR-77) came in two versions, the more common organ style wooden case with built in music stand and a black tolex "roadie protected" (TR-77V). Incidentally, if you don't already know TR stood for Transistor Rhythm. It had separate faders for the Kick, Snare, Guiro and Hi-Hat/Cymbal/Maracas, making it a very flexible machine in the studio. As with many early drum machines you could get more out of them by selecting multiple rhythms and layering them over each other.

Sonically, the 77 is probably the warmest sounding of all Roland's analogue beat boxes (before or since). The kick does lack punch but more than made up for that in bass content and the percussion sounds are very nice indeed. The standout sound has to be the guiro pattern which you can fade in over the top of the Cha-Cha and Mambo rhythms. Unashamedly "lounge" and instantly recognisable.

The preview demo, (below) re-creates some of the TR-77's most well known recorded moments. Initially, you hear a combination of Cha-Cha & Baion (Ultravox's "Hiroshima Mon Amour"). As it plays, the guiro is faded up, then the Hi-Hat, and finally it drops down to just the snare and kick on Foxtrot 1. There we added some vintage spring reverb and an EH Electric Mistress pedal to recreate Gary Numan's "I Nearly Married a Human" from Replicas.

You can spot the R-77 on quite a few tracks from the late '70s. It was quite popular for a few years until the CompuRhythm range took over. Gary Numan used it briefly on the "Replicas" album before moving on to the CR-78. Ultravox (with John Foxx) also used a 77 first before Foxx immortalised the CR-78 on his seminal "Metamatic" album. The 77 is also heard quite prominently in the intro to Squeeze's "Take Me I'm Yours" and "Girls On Film" by Duran Duran.

LINK:
CLIK HERE TO BID ON THIS ITEM!
Posted by machineboy