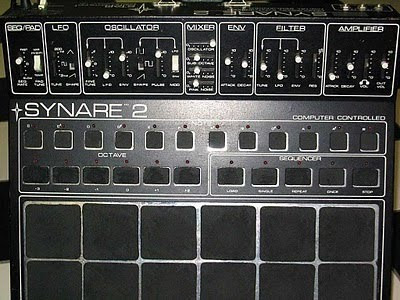 The Synare 2:
This was Star's flagship model., with one oscillator with sawtooth, and pulse waveforms,
white noise generator, etc.
But this had assignable functions, ie. routing the LFO to control certain parameters at once.
The LFO also added a sawtooth waveform) You could also select a wide range of octaves for the pitch to sound at, along with a fine tune function.
A major adjustment was the introduction of a fairly advanced sequencer with different patters, and the ability to change patterns and octaves. You could also adjust the speed and the note(s) sounded by the sequencer.
Plus, it had 16 pads instead of just four.
Retail price in 1976 was $1,395.00.
Made roughly from 1976-1982
Extremely rare.
Power light turns on. further testing was not performed, due to lack of
necessary components

LINKS:
CLICK HERE TO BID ON THIS ITEM!
I GOT THIS LINK FROM THE 'MIGHTY' MATRIXSYNTH!
Posted by machineboy