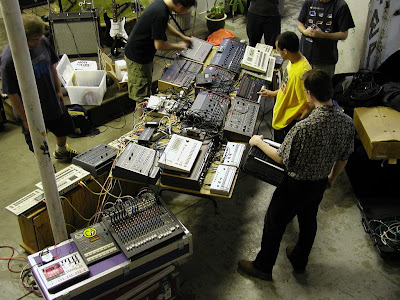 This happened in Vancouver at a community space called "Here on Earth" that was located in the industrial section of East Vancouver, and it was organized by several members of a now defunct electronic music collective called "The Black Hole Club". I found these and other pictures while I was cleaning up one of my hard drives, and I thought that I would upload it so I could share it on http://www.livepa.org/board and I didn't expect it to show up on Matrixsynth.com

We had somewhere around 30 machines show up and the idea was to get them all synced up to one clock source. Sort of a "hey, can we do this?" exercise more than a musical or recording one. It did work, but as you can imagine the sound was godawful and given the number of machines there obviously was a lot of slop in the timing. The hard part was actually getting a clock that each of the machines could recognize; there were a number of pre-MIDI boxes that had a wide variety of differing clock requirements so it was no small feat getting everything to talk to one another.

Before we did this, we had to define what a "drum machine" was, and we settled on a definition like "a stand alone hardware device that is capable of generating simultaneous and polyphonic sounds that are primarily percussive in nature and is capable of playing back those sounds in a preset or user-defined pattern, and is intended for use as a backing rhythm track source alone", or something to that effect which excluded MPC's, sequenced monosynths/modulars and workstations/grooveboxes.

Like I said before, it was really a try-it-and-see type thing, rather than a musical or recording exercise, as well as a great excuse to get together, geek out on drum machines and drink beer. Good times!

This was originally posted at our fave blog Matrixsynth.com
Posted by machineboy