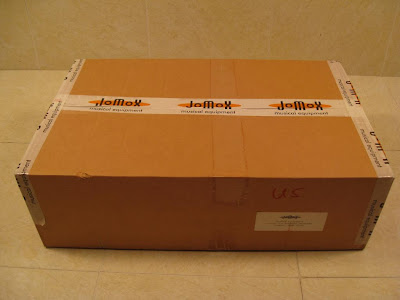 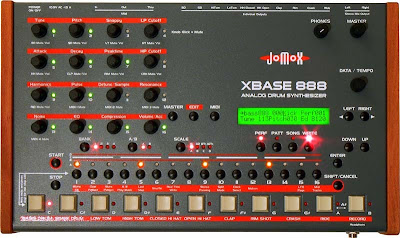 What do you mean you don't want one....everybody wants this awesome machine.....hahaha...you'll learn!!....here's more info about this monster....
Hoping to continue the grand tradition of unique and intuitive analog instruments, while at the same time extending their capabilities using the latest technologies, we are proud to introduce the JoMoX XBASE 888, our newest analog drum machine. It combines the ultimate vintage sound with a modern, intuitive interface for both modern studio and live requirements. There are several notable new features on the XBASE 888:
The kick drum and the tom toms now each have an adjustable pitch envelope and sound even phatter than before!
The analog noise parameter of the snare and hi hat can be "metal-ized" to create sounds extremely similar to vintage drum machines - and this is fully adjustable!

And, because it has no X-Filter, the XBASE 888 is more affordable than the 999.
But it still has an unbeatable sound, this little beauty!

· Real analog sound production
The BD, SD, LT and HT use true analog circuits with full digital control, which allows the storage of presets and full midi control of all parameters. To keep the analog circuitry as pristine as possible, all D/A converters are specially designed for and integrated into the circuits with proven XBASE/AirBase technology.

· 16 knobs
Sound editing is made by continuous rotary encoders for every analog parameter, allowing you to edit the sounds without jumps or awkward turning situations. Close to each knob there is a 3-color LED indicating which parameters are editable for the selected instrument.

· Improved kick drum
The most famous sound of the original XBase-09 was clearly the kick drum. Now, on the XBASE 888, that famed kick drum circuit adds an adjustable pitch envelope. With this added feature, the decay time constant is changed, and you can create 808-like slow pitch decays. Additionally, the new compression parameter is useful to morph between a 909-style ultra compressed envelope or an 808-ish exponential curve.

· Analog tom toms
The XBASE 888 also offers the extremely phat, punchy and widely editable analog tom toms as originally included on the AirBase99/JaZBase03/XBASE 999. However, now they each employ an adjustable pitch envelope.

· Internal step sequencer
The XBASE 888 also features the renowned JoMoX step sequencer, with some notable improvements: all patterns are A/B patterns, and you can now choose between having two alternating 16 step patterns or one 32 step pattern. The sequencer utilizes 3-color LEDs to indicate the individual step edit modes even better and more intuitively. The micro shuffle can now be edited for each instrument individually. Bank select now has its own switch. 4 banks with each 16 A/B patterns are now available, resulting in 128 actual 16 step patterns.

· Stereo mix with pan control
All instruments except for the kick drum can be panned in the stereo bus. If a cable is inserted into any individual output, the corresponding sound is removed from the stereo bus.

· 2 LFOs
Of course the XBASE 888 retains two phat LFOs which can be clocked to tempo or run freely and which can be routed to any destination.

· Hi Hat filter
The Hi Hat section contains a great sounding analog band pass filter with independent lowpass, highpass and resonance controls. In addition to the 8-bit HH samples, analog noise can be the sound source as well.
New: instead of pure white noise you can now create a wide variety of "metal-ized" noise signals, tweakable by 2 parameters, which can be the source for the snare or hi hat.

· Large alphanumeric LCD display
For a more convenient and clear operation the XBASE 888 has a big alphanumerical LCD display with 2x24 characters. Kits can be named and the analog step sequencer has a bar display.

· Flash sound ROM
The sound flash memory in the percussion section (HH, Clap, Rim, Crash, Ride), which contains 31 samples per instrument, can be overwritten by the user via midi sample dump in order to create your own samples.

To bid on this brilliant machine go HERE!
Posted by machineboy