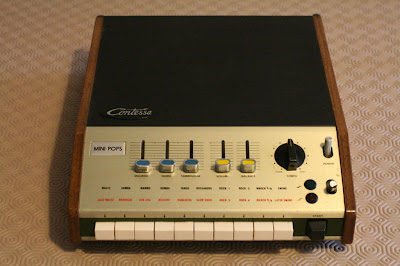 This rare drum machine made in the early 70's was made by the Keio Electronic Lab in Tokyo Japan. It was made famous by Jean-Michel Jarre on his 1976 "Oxygene" album.

There was a later version of this rhythm machine available labelled Univox SR-95. They were meant to be identical but there were two major differences. On the later version, the "Beguine" pattern was different and the "Rim Shot" was replaced with a "Cowbell". This doesn't sound like much but anyone trying to recreate Jean-Michel Jarre's sound would struggle because both the original Beguine pattern and the rim shot were used extensively by the French master of lazers!

To the unit itself. It's in perfect working order with no issues. Every control is operating exactly as it should and the sound is crisp and clean. All the contacts are clean and there are no scratchy sounds from any of the buttons, sliders or the tempo control.

Cosmetically, this Mini Pops 7 is in excellent condition. It's missing its "Back Door" but that doesn't cause any problems. The chrome carry handle and retaining clip are still present and operational. All in all, this is a fantastic and very collectable Rhythm machine in perfect working order.

LINK:
CLICK HERE FOR MORE INFO & TO BID ON THIS MACHINE!