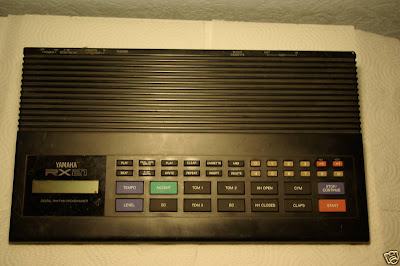 RESONABLE CONDITION COSMETICALLY
TOP IS GOOD
A FEW MARKS ON UNDERSIDE
ALL SEEMS TO BE WORKING ALTHOUGH I HAVE NOT USED IT FOR SOME TIME.
THE OWNERS MANUAL IS ON A CD.

100 Preset Rhythm Patterns
40 ROM Preset Patterns, all of which may be called into RAM and edited or altered to create original rhythms. There are also 4 "break" patterns of different lengths to make programming easier, as well as 56 user-programmable pattern memories.

Visual Rhythm Pattern Display
Displays exactly what is being programmed in the Step Write Mode as well as playing it in real time.

Song Mode
Allows the combination of up to 999 Patterns in a single song, including intros, fills, repeats, tempo and volume changes. Up to 4 songs can be stored in internal memory, with a maximum of 512 parts and Insert, Delete and Copy functions make song editing simpler.

Independent Instrument Level and Accent
The RX21 allows the level of each instrument to be set independently to set up any balance required. Accents can then be added to any instrument on any beat, and the level of the Accent can also be precisely controlled.

MIDI Compatibilty
The RX21 is a MIDI Instrument, and can control or be controlled by other MIDI equipment such as sequencers, synthesizers, and tone generators. It can ne a pary of a fully automated digital music system, or can provide the synchronization signal which keeps the performance together.

Cassette Storage
Once all Patterns and Songs have been programmed into memory, they can be saved on a standard cassette tape. They are stored in digital data form and can be loaded back into the RX21 at any time, allowing for the creation of a library of custom rhythms.

The Rear Panel
The RX21 has a pair of stereo line-level outputs that places the drum sounds in stereo perspective, plus a stereo headphone jack that outputs the same signal as the stereo line outputs. There are also input and output jacks for the cassette interface and MIDI In/Out Connectors.