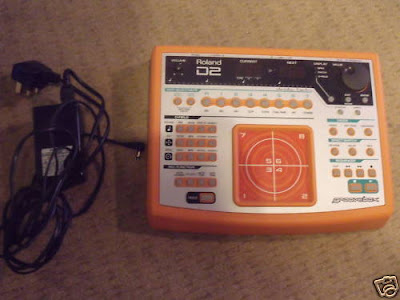 In good condition and full working order, though it doesnt include its manual though does come with a power supply

The manual can be downloaded here http://www.vintagesynth.com/roland/d2.php#

Although not as expensive at the MC505 it features many similar functions and capabilities Roland's D2 Groovebox is a compact, performance-oriented Groovebox (sequencer/sound module)--sort of a smaller MC-505--designed entirely around Roland's D-Field Controller technology. This touch-sensitive pad makes it easy to program and modify patterns, sounds, effects and more simply by touching the surface. It has all of the 505's sounds and a similar sequencer with 150 all-new patterns including the latest 2-Step and R&B styles.

The D2 has more than enough sounds inside, with 600 Preset patches and 30 Preset drum kits from the MC-505. These dance-oriented sounds include ultra-fat bass and lead synths, screaming TB-303's, dance piano and strings, plus 30 floor-pounding drum kits. Phrase/Groove loops are also plentiful with 150 patterns plus 240 RPS (Realtime Phrase Sequence) patterns. There is a new Step Recording method using the D-Field and 32 LEDs as well. Separate Reverb, Delay and Multi-FX sections with Groove-oriented algorithms add space and effects to your sounds & grooves. And with the D2's Megamix function, it's easy to remix patterns into your own creations using the D-Field or Value dial.

The D2 is an awesome concept in terms of hands-on, real-time performance control. However the hidden menus and overall navigation can cause some headaches. If you want to edit your own sounds, you may want to connect a MIDI Controller to tweak all the sounds you want and save into one of the 256 users patches. The D2 is definitely designed for the electronica, dance and hip-hop musician on a budget. It is not as complete a Groovestation package as the MC-505 or MC-909, but its D-Field controller is very novel and fun to use. Because the D2 is fairly cheap, it does make a great toy to add to your arsenal if manipulating beats and grooves in real-time and at the touch of finger is what you're in to.