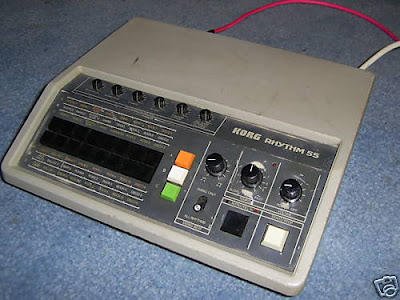 For sale is this hard to get hold of, and usually hard to afford, vintage Drum Machine:

“The KR55 was, for its time (1979), an advanced preset rhythm drum machine with up to 96 preset rhythm patterns! These patterns cover the whole gamut of presets (Waltz, Samba, Rhumba, Bossa Nova, Tango, Slow Rock, Swing, Rock, etc.). The KR55 also featured a "swing beat" control to add a variation to the groove. Each drum sound's level can be individually adjusted for each pattern. It can also be externally controlled via footswitch jack for the Start/Stop and Intro/Fill switches. It has been used by Jean-Michel Jarre, Trio and Depeche Mode.”
(from http://www.vintagesynth.com/korg/kr55.shtml where it recieves a rating of 4.6/5)

Controls on the machine are as described above; 96 rhythms, a Swing-Beat control, the obvious Tempo Control, Volume, Start/Stop button, and a Intro/Fill button, as well as individual instrument volume controls for Bass Drum, Snare Drum, Cymbal, Hi-Hat, Tom-Tom/Conga and Rim Shot/Cowbell/Claves, allowing for a whole range of different sounds, mixes, and providing a clear, and easy scope for interactivity.

At the back, in the form of ¼ inch standard audio jack sockets (same size as a standard guitar cable), there are slots for ‘Signal Out – High’, ‘Signal Out – Low’, ‘Footswitch – Intro/Fill’ and ‘Footswitch – Start/Stop’, as well as one labelled ‘Trig Out - +5v Out’. There is also a slidey switch called ‘Trig Select’, on which, options are (as note symbols) Semiquaver, Quaver, Crotchet, Semibreve, and ‘BD’. I’ve never used this feature, to be honest, so don’t know entirely what it does, although i would guess that it might affect the rate or timing of Fills etc. The labels a bit mucky, but still readable.
Footswitches are easy to get hold of, or even make, as i did once. A Standard ¼ inch jack keyboard sustain pedal would work nicely; this was what i used with it, before getting an actual keyboard to use the pedal on! This box also boasts a massive 2.5m power cable, so you won't need to drag extension lead all over the place to plug it in!

The original Korg spec is well worth checking out, and reads as follows:
“Thanks to Korg's synthesizer experience, this advanced rhythm machine offers more realistic percussion instrument sounds than ever before.
And special digital circuit techniques allow you to help create the rhythm instead of merely selecting it.

Add intro and fill-in patterns, and adjust bass drum, snare drum, hi-hat and other instrument volume independently to obtain optimum balance and mixing.
The total of 48 different rhythmic patterns include the latest from rock, pop, and disco. We've also added a trigger-out jack for extending the system to include a synthesizer or sequencer.

And our unique "swing beat" control is continuously adjust
able to add the subtle changes that make rhythm exciting.”
(from http://halifax.kijiji.ca/c-buy-and-sell-musical-instruments-Korg-Drum-Machine-Vintage-W0QQAdIdZ105725218)

A good shot of the controls on this model (although different machine to this one offered) is as follows:
http://machines.hyperreal.org/manufacturers/Korg/KR-55/images/kr55_det.jpg

As for condition, this fantastic device has obviously led a full and fast life, probably gigging around the electro-circuit in the 1980s; it’s been there, done that... this is the real thing; it doesn’t come much more real than this. In places, the control board has been worn by the keen digits of electro-pop wizards; the box boasts battle scars; some scratches, dents and bumps (most notably at the back corner, as shown in the photo). There’s no fancy nose-up sterile factory-coldness here; only signs of life, brilliance and authentic use...
But this old box hasn’t given up; these old Korgs were built like tanks, designed to be used by real musicians; not daintily handled by conservative dabblers in the electronic arts, and as a result, it’s as strong and steady as it was, the day it came out of the factory.

The sounds these boxes produce is brilliant; warm and classic... no cold, digital sounds here, only that brilliant classic warmth, which only these old machines seem to do. I've been running this one through a spare guitar amp i had lying around, and that sounded great; playing around with gain and distortion, as well as the amp's tone controls allows for a whole new realm of brilliant sonic experimentation; this truly is a versatile box!

These machines have been used by Jean Michael-Jarre and Depeche Mode, as well as Trio, as mentioned above, and as such, hold fantastic sounds, as well as great reputations within the electro and electro-pop genres. As well as this, i’m sure that it’s use could be carried into any number of further genres, due to it's versatilite sounds and controls, or even fused with existing genres, to create entirely new and exciting sounds.

There are plenty of videos of the Korg Rhythm-55 on youtube, which go some way to demonstrate what this box is capable of, which i would highly recommend looking at, so that you can really get to know the sound.
Feel free to have a read through the machine’s fantastic reviews on Harmony Central, and get to know the box a bit more, from a use perspective:
(http://reviews.harmony-central.com/reviews/Keyboard+And+MIDI/product/Korg/Rhythm+55/10/1)

These boxes usually sell for much more than this one starts at. Prices paid by people on HC are £100 and $250

A quick google search brings up some current prices elsewhere on the net:
€250 (http://www.macmusic.org/ads/view.php/lang/en/id/46975/)
$150 (http://www.trademe.co.nz/Music-instruments/PA-pro-audio-DJ-equipment/Synthesisers/auction-200721650.htm)
and even
$450 (http://halifax.kijiji.ca/c-buy-and-sell-musical-instruments-Korg-Drum-Machine-Vintage-W0QQAdIdZ105725218)
and even starting at £149.00 on ebay right now, at the time that this listing goes on.

Frankly, these prices are meaning that these machines are increasingly becoming pieces in the collections of proffessionals, who can afford to pay such prices, but not this machine! The low price on this KR-55 is to try and get it into the hands of someone who might not usually be able to afford one, but might really want one. Too many people nowadays are in music for the money, and i, for one, am tired of it... this machine was built for music, and hopefully by starting it at this price, it’s going to stay in the hands of someone who’ll use it and love it, rather than keep it as a ‘collection piece’.

As a closing note, i honestly, seriously doubt that any more of these machines are going to turn up at this price, any time soon; if it’s a KR-55 you want, they don’t come much cheaper than this!

If you want any further information, pictures or have any questions regarding this vintage drum machine, feel free to ask away, and i’ll do my best to reply.

Thanks for looking, and good luck if you decide to place a bid HERE
Posted by machineboy